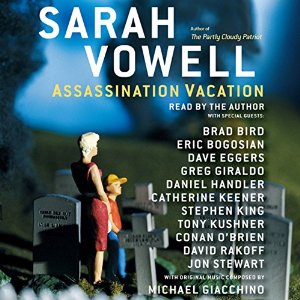 This is the synopsis From audible.com:

“Sarah Vowell exposes the glorious conundrums of American history and culture with wit, probity, and an irreverent sense of humor. With Assassination Vacation, she takes us on a road trip like no other, a journey to the pit stops of American political murder and through the myriad ways they have been used for fun and profit, for political and cultural advantage.

From Buffalo to Alaska, Washington to the Dry Tortugas, Vowell visits locations immortalized and influenced by the spilling of politically important blood, reporting as she goes with her trademark blend of wisecracking humor, remarkable honesty, and thought-provoking criticism. We learn about the jinx that was Robert Todd Lincoln (present at the assassinations of Presidents Lincoln, Garfield, and McKinley) and witness the politicking that went into the making of the Lincoln Memorial. The resulting narrative is much more than an entertaining and informative travelogue, it is the disturbing and fascinating story of how American death has been manipulated by popular culture, including literature, architecture, sculpture, and, the author’s favorite, historical tourism.

Though the themes of loss and violence are explored and we make detours to see how the Republican Party became the Republican Party, there are lighter diversions into the lives of the three presidents and their assassins, including mummies, show tunes, mean-spirited totem poles, and a 19th-century biblical sex cult.”

My synopsis is shorter:

Assassination Vacation is book for the obsessed by the obsessed. Sarah Vowell discusses her pilgrimage- her word- around the country in pursuit of historical sites and objects tied to the assassinations and assassinators of Presidents Lincoln, Garfield, and McKinley.

Why did you choose this audio book?

I’m that annoying person who you go to a museum with who has to read everything. You’re three rooms ahead of me and trying to figure out what direction the exit is and I’m sitting in front of an old silver urn trying to commit to memory who made the urn and why, and other useful information that I always use in my day to day life.  I’m not as bad as I used to be, and can skim small plaques and even ignore some if I’m feeling really crazy that day, but if there’s information and history in front of me, I want to know about it.

I have also had the privilege in my life to go to a lot of museums and historical sites, and I have a similar attitude towards them as Vowell. I might not be as obsessed as the author, but I understand experiencing the feeling of the sacred when in the presence of artifacts or being in the actual physical location that history has happened. It’s a connection to the past through something real. I close my eyes and imagine that I am there.

I will say, I did start reading this book a few months ago and stopped after about 20 pages; relics tend to bother me, and obviously this is a book that deals with them. I went to a Catholic high school and one religion class they passed around a little shadowbox filled with bone fragments from saints (or “bone fragments from saints, we promise these are definitely not fake” as I thought of them) and pieces of burial cloths and I was not a fan. I passed it to the next person very quickly. It’s a way to be close to history and the sacred, I guess, but it was not my preferred method. Still isn’t. Also I don’t think I realized that day was going to be “hand around pieces of dead people” in my junior religion class, so it was a bit of shock. I’m just now realizing how weird it was that my religion teach thought that was really going to be a useful experience for a bunch of sixteen year olds…

Anyways, I’m glad I decided to listen to the book, as it has given me a different perspective on relics. While I still find them a little disrespectful to the dead, I understand the need and meaning behind them more. If I feel the obsession and connection with some random urn at a museum, it makes sense that some people put more meaning on things that are more solidly connected to the past humans who did things in history.

What main themes does the author explore?

It’s a book that makes the myth real; these stories about assassins that have become such big stories (like Lincoln’s) or such small stories (I’m sure Garfield’s was basically a footnote in my high school history class) and makes them just stories. Lincoln wasn’t a god; several people worked on his autopsy and we hear about it in detail.

Garfield wasn’t no one; listening to Sarah Vowell talk about how Garfield was so inconvenienced by being the president, would so much rather be reading a book than governing— it was endearing to hear. He had a special reading chair. He was on his way to vacation when he was shot.

The assassins are also people, set firmly in a context and with their own reasons for their actions. Not, like, great reasons, but reasons. There was Booth, expecting a hero’s welcome after his crime and confused that people weren’t more excited that he’d killed Lincoln super dramatically and yelled some Latin words; Giteau, apparently so unhinged and so insufferable that he couldn’t get laid in the utopian free-love cult he was part of for five years and then getting super angry when Garfield didn’t just give him a political office; and Czolgosz, a sad man who wanted in with the cool anarchists and got ignored so decided killing McKinley was the best course of action.  Look, we’ve all been there.

What did you learn?

Details. The book goes into a depth that you can only really get from listening to people who truly care and have a passion for the subject matter.

How has the book changed or broadened your perspective?

It made me consider the lasting political ramifications of the Civil War differently, in how it effected politics in Washington in a way that didn’t really stop until the Spanish American War. And that the Civil War itself was, as Vowell states, an inevitability from the moment there was a compromise over slavery during the Revolutionary War, that that compromise ended up in “the back of Lincoln’s head.”

It’s also a book that in each detail reminds the reader that these people were real, that they lived real lives that mattered individual of the footnote their actions and deaths made in history. It’s easy to forget. It’s important to try to remember.

Haven’t gotten around to Assassination Vacation yet? Get it here!