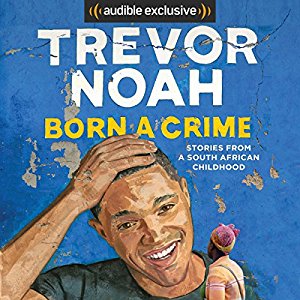 I listened to this book in chunks. Partly during a long drive, and partly during walks and a long weekend, I devoted my complete attention while it was playing. I liked that Trevor Noah had not only written it but had also read the audiobook version. I had watched him on The Daily Show before. I liked him, but I was still missing Jon Stewart. What was The Daily Show without Jon Stewart? It continued to be a quality show with wit and commentary, of course. It just felt different, and I didn’t watch it as much. Then, I was looking for an audiobook and Born a Crime was at, or near, the top of many “best” lists. I gave it a shot.

I was immediately gripped by his storytelling. With every turn, he guides you through the experience of living in South Africa in the late 80s and through the 90s. Explaining each language spoken, each racial group, and each neighborhood, Noah is able to make a unique upbringing very relatable. I did not grow up poor. Many people he talks about are in poverty, but Trevor is able to plainly discuss why things are the way they are. Racism, institutional discrimination, and a complete disconnect between those in need and those who have plenty. People don’t just need an education, they need the means to use that education. A major focus of the book is not just the politics of skin color, but of language. In his experience, language is what helps people identify with each other, and is also the bridge to acceptance. Language is what defines who you are in the world, and what is possible for the life you live. He makes a compelling argument, and it is easy to see how it shaped his world view.

His perspective permeates his descriptions of everyone around him. Noah has a great understanding of people. His observations on his family and his friends around him are insightful. He sees people’s shortcomings and strengths, without judging them. He also has the ability to show multiple layers in people, enjoyably, through their actions. In particular, his mother turns out to be one of the best written characters in any book I’ve read, fiction or nonfiction. She is the one common thread in the story, and is worthy of her own book. She is not only Trevor’s inspiration, but an inspiration to anyone reading (or in this case, listening). I felt like I’ve known her for a very long time.

Trevor jumps back and forth through time, and chooses to tie events together by theme. The result is a story through his mind, through his memory. When I have thoughts, they’re never chronological. In any given moment, I’ll have a thought about yesterday, quickly followed by ruminating on something that happened 15 years ago. I loved that he chose to write the book this way. For me, he generated great empathy. I felt like I got to know him. He and I are roughly the same age, so it was easy for me to relate to his pop culture references and his views on the generations before us. A section on Street Fighter II was especially resonant for me. It put me directly in that time and place, allowing me to relate completely to the story.

Which brings me to my closing thoughts of Born a Crime. Though I’m compelled to agree with Noah that language is the main thing that defines who you are to people, I believe there’s a significant modifier that should be considered: time and place. We have the ability to communicate reliably with the help of technology today, regardless of language. Yes, English is still lingua franca, and carries with it a long history of progress and pain, and it would take a very long time for that to change. However, I’m an idealist at heart. I can envision a future where language is as easy to understand as someone wearing a different color shirt. No more dominant language, just language and communication. When we reach that point, I believe this world will drastically change for the better.

I cannot emphasize enough the great experience you can have when listening to this book. It will stimulate you on so many different levels. For me, it sparked new thoughts on the world around me and the people living in it. I hope you have the same experience.

ReKon Reports 08.10.17
On Inspiration and Directing and Everything In-Between