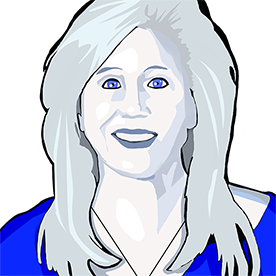 Donna Sole, an Energizer Bunny whose batteries are charged with strong Colombian coffee, is Director of Client Relations at ReKon Productions. In her role as DCR, she not only builds awareness of ReKon’s presence, values, and brand in the community, she also partners with new and existing clients to find solutions that are perfectly tailored to their needs. Her attention to detail comes in handy when collaborating with ReKon’s internal team and clients to assure a smooth and easy process on any project.

Donna holds a Bachelor of Business Administration degree in Management with a minor in Psychology from Dallas Baptist University.

Donna is no newbie to the entertainment world. Growing up as an accomplished figure skater she started out entertaining many while performing on ice. When her daughter joined the entertainment profession as an actor on a primetime show, they decided to move to Los Angeles from the Lone Star State. In addition to helping facilitate her daughter’s acting career, Donna also became president of Sole Talent Partners, a company that represents motivational speakers and entertainers of all types. Prior to that, Donna had a successful career in the pharmaceutical sector where she spent years working in sales and business development.

Donna’s initial connection with ReKon Productions happened in 2013 onset of the film The Caterpillar’s Kimono which Lesley co-produced and Donna’s daughter acted in. While shooting, Donna became fascinated by Lesley’s journey to find the infamous margarita guitars in Vegas! They met again on the ReKon Productions commercial The Shootout. Due to Donna’s years of experience in business development, they both realized she would be a perfect fit in the Director of Client Relations role, so she joined the team in 2017.