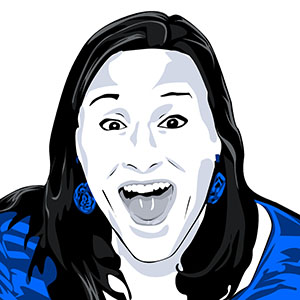 Marielle Woods, a pun-loving action aficionado proficient at photo booth posing, is a Director at ReKon Productions. She loves to push buttons and boundaries, telling stories that make audiences think — with a few explosions or car chases along the way. She joined the Directors Initiative in 2018. Her first project with ReKon, as part of the initiative, was SPIN a short film developed for American Film Institute’s Director’s Women Workshop.

Additionally, Marielle has spent much of the last three years working with some of the best stunt coordinators and second unit directors in the business on films including John Wick 2, Baby Driver and Bright.

Marielle holds a Bachelor of Arts in Visual Studies from Harvard University.

Marielle got her start in docudrama television, directing and producing shows for networks including Discovery, History, A&E and Animal Planet. She cut her teeth filming gunfights, avalanches and animal attacks and has traveled around the globe in pursuit of good stories.

In the last few years, Marielle has moved into the scripted world and helmed award-winning branded content as well as internationally recognized short-format narrative pieces. She flipped a car in the jungles of Puerto Rico for her short Mi Corazon and recreated war-torn Iraq (in ReKon Studio) for her film Do No Harm.

To be honest, Marielle has no idea when she started working with ReKon. One day they were just there.