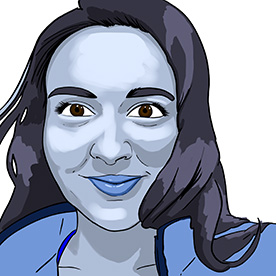 Lisha is a member of the Producers’ Guild of America. Yakub holds a Bachelor of Arts degree in Theatre and Economics from the University of Southern California  and a Juris Doctor degree from Hofstra University, School of Law.

Lisha started in the industry as a child actor and found her love of producing in her late teens. She has been a champion for independent filmmakers, working with them in various capacities of her career. Lisha previously worked for Sony Pictures Television in the International Publicity department, Ramo Law PC creating the Packaging and Sales department, as a literary manager at Discover Management and is the current founder of Calgrove Media. She has been involved in projects that have been distributed on Hulu, Netflix, Amazon Prime, and territories worldwide.

Lisha met Jon Kondrath in the halls of the Zemeckis Center at USC. As college students, they worked together to produce content for the campus TV station, Trojan Vision. Once they both grew up and reconnected at a PGA event, a “hey wouldn’t it be cool if…” conversation lead to Lisha forming the Sales and Distribution department at ReKon Productions in 2020.