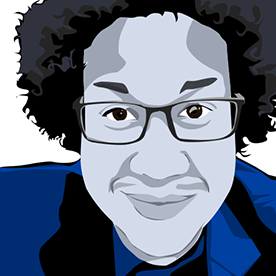 Samuel J. Ashe II, an old millennial with a penchant for inclusive storytelling, is currently a Social Media Specialist at ReKon Productions. As SMS, he organizes weekly content plans and curates content for Social Media Platforms Facebook, Twitter, etc. In this role, he builds digital community for the ReKon brand by engaging clients and filmmakers and develops advertising to broaden the company’s reach.

Samuel developed and is responsible for the social media campaigns ReKon’s Summer Audible Book Club and the Kan Drive.

Samuel is a member of BMI. He holds a Bachelor of Fine Arts degree in Film & Video Production from City University of New York City College and a Master’s of Business Administration degree in Marketing from California Lutheran University.

Samuel began in production back in high school with broadcast journalism, eventually executive producing the monthly news & entertainment program. In college and beyond, he refined his skills as Writer-Director working on and sometimes starring in web series, short films, features, and music videos such as Coming Up Slowly (2009) and Second Wind (2013). Outside of films, Samuel has produced music and lyrics for projects such as Zest (2013). Before ReKon, Samuel worked as a freelance director, writer, producer, and songwriter. He also was a Direct Support Professional at PathPoint, exhibiting his versatility while instructing adults with disabilities in life skills.

Samuel started working for ReKon Productions in May of 2016. Eager to apply his filmmaking background with his marketing research knowledge, a shot in the dark reconnection turned into a warm welcome to the team. The rest is, of course, history.