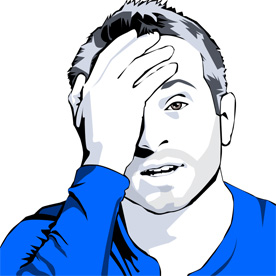 Jon Blue, an Adventure Time super fan often found with his dog and talking about old movies, is currently Director of Creative Development at ReKon Productions. As DCD, Jon oversees creative development of all internal ReKon projects as well as providing consultation to external projects. He has streamlined the creative process for the company and has brought consistency to the ReKon voice.

Jon also produces on behalf of ReKon Productions. Recent projects include the web series Good Game, the luxury theater promo Cinepolis, and the spec commercial Fool Me Once for Dunkin’ Donuts.

Jon holds a Bachelor of Arts degree in Cinema Television Critical Studies from the University of Southern California.

Many moons ago, Jon moved to Los Angeles to attend the University of Southern California’s prestigious film program, a long-time dream of his, which is where he started in production. Since then, he has worked on a variety of commercials, shorts, branded content, music videos, and web series. His projects have included Swisher International, Inc. and TuneCore’s Convenience Store Sessions with Andy Allo and the short Sons of Guns with actor Charley Koontz. Prior to ReKon, Blue worked in Paramount’s licensing division, development for Sony Pictures Television, and Post Production Sound for Sony Pictures Studios.

Blue joined ReKon Productions in 2012, assisting in the production of the short Android. He met Jon Kondrath at USC film school, where Kondrath would regularly beat him in Super Smash Bros. They kept in touch after graduating, and Blue eventually joined the ReKon family.