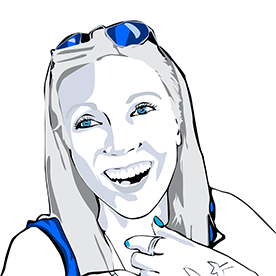 Kathy Sue Holtorf, a tiny firework lightning bolt who can often be overheard talking about pizza or the importance of conversation while simultaneously asking for your insta, is the Director of Brand Strategy at ReKon Productions. As DBS, Kathy Sue leads marketing initiatives and generates strategies to expand brand recognition, improve client experiences and drive growth.

Kathy Sue is proud to be on the Board of Directors for the Culver City Cultural Affairs Foundation and is YouTube Certified.

Since the tender age of four, Kathy Sue wanted to go to Hollywood and become an actress. The defining moment of her young adult life happened when she brazenly walked onto a lot and past the security guard with her headshot in hand — and landed a background role on One Tree Hill. She stayed with the show for four seasons, progressing to PA, then Camera PA, then Second Unit DIT Utility. At the same time, she worked for Wilmington Camera Services, renting camera equipment to prestigious DPs. The combined experience with her voracious energy launched her career.

Kathy Sue first met Lesley Lopez outside a ReKon production in 2012 — an independent horror film called The Channel. It was on that set that Associate Producer Kathy Sue captured a smiling 1st Assistant Director in an image that is now used as Lesley's ReKon caricature. Shortly after, Kathy Sue teamed up with ReKon for the short film Eat & Run. After Assistant Directing ReKon's The Adventures of Perry & Clark in the spring of 2018, Kathy Sue started conversations with Lesley (and Jon) about the brand. One long lunch and four conversations later, Kathy Sue officially joined the team.